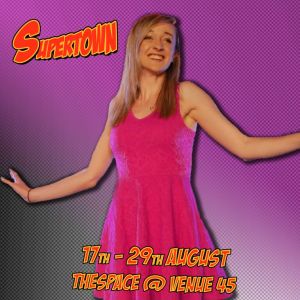 Hi there! This is the Supertown reporter, bringing you more news from the Superteam on their recent Superdash!

Today I’m speaking to our very own Supertown composer and MD, Robert Sanders, and Sophie Massa who plays the lead – Sally!

They spent their Superdash in the Caribbean – jealous, us?!

How did you find your tropical Superdash Sophie?

I really missed doing the Superdash with the rest of the cast, as it looked like the ‘real’ events were so much fun! But we still had a great time doing it on the Disney Cruise Ship (although it was quite testing at times in the heat!) It was great fun to bring some Supertown to the Caribbean! The hardest bit was the 15km walk surprisingly, as we did that on the Disney Island and the heat made it unbearable! And I had awful sunburn afterwards as well!!

We really struggled with the heat. All courses were flat but were a nightmare because of the heat! Especially the walk which was ridiculously hot!

Tbh it was a massive inconvenience ha. We just wanted to sit on the beach.

Thank you for such an honest response Rob…Click below to donate!

This is the Supertown reporter, signing over and out!

TEFL tips and ideas from a developing teacher

A time for change - but for who? Looking at how we can all support our young people.

Exploring the grey areas of teaching,

A journey into philosophy, education and politics through a PhD and beyond